Wares with printed marks for Warburton,  Newcastle Upon Tyne

Bell's book on Tyneside Pottery records various Warburtons in the late 18th century, but no James Warburton, as on the Nelson jug below.  According to Bell, the Warburton Place Pottery, Carr's Hill, Gateshead, was founded by John Warburton around 1740, and run by him until sometime before 1795 when it passed to Isaac Warburton, and then after that to Ellen Warburton.  The factory closed in 1817.

In parallel, John Warburton ran a warehouse/shop at Quay Side to distribute his own items.  In 1769, the Chronicle refers  to John Warburton's 'Earthen Warehouse on the Quay', and in 1770, to him selling 'various sorts of Earthenware of his own manufacture'.

Norman has further identified a James Warburton born c1777, and in 1841, living in Clive Street Tynemouth where his occupation is given as china gilder.  So this could be the James Warburton on the Nelson jug, who would have been 28 in 1805 when the jug was made (date of the Battle of Trafalgar).  If so, by 1841 he was apparently living out his old age in somewhat straightened circumstances.

Another confusing factor is that Warburton transfer plates resurfaced in Southwick at both Scott's and Moore's potteries in the 1830s.  So when the Warburton Place Pottery closed in 1817, someone (James?) must have retained a small number of copper plates and, about 15 or so years later, decided to sell them on.

If you have an item with a Warburton transfer, please get in touch using the link at the bottom of this page. 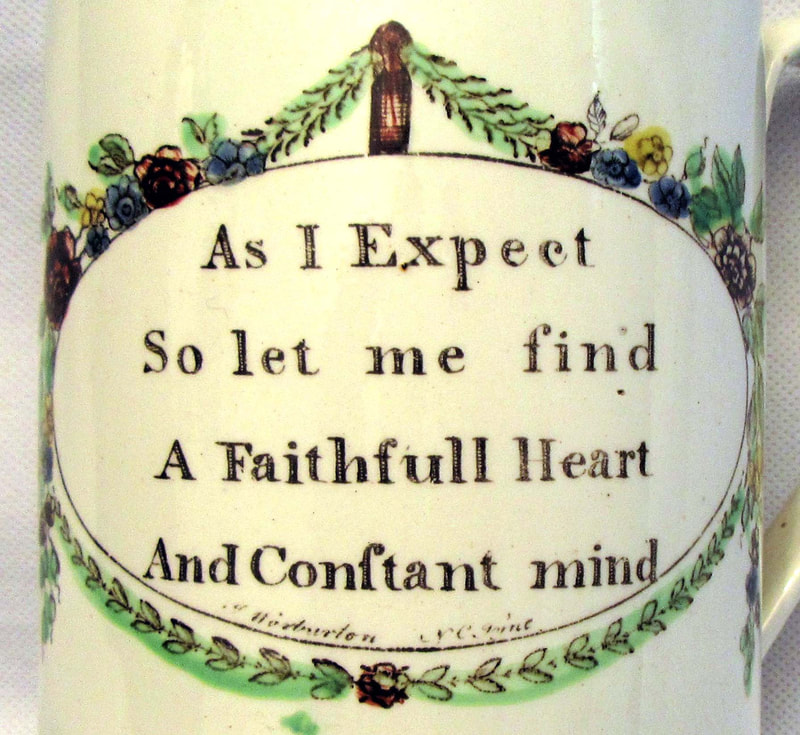 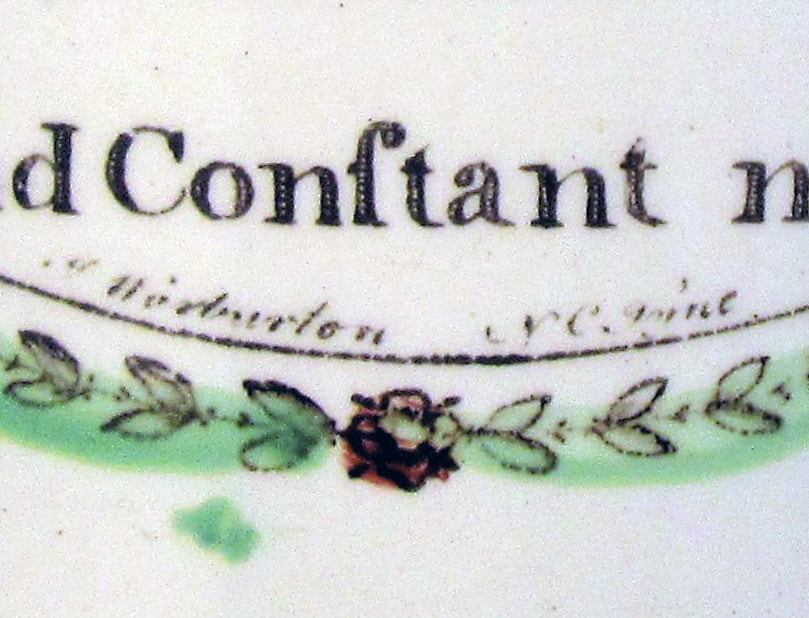 Bell says that items with the J Warburton printed mark were 'probably the work of John Warburton or Joseph Warburton'.   We have a third contender, James. 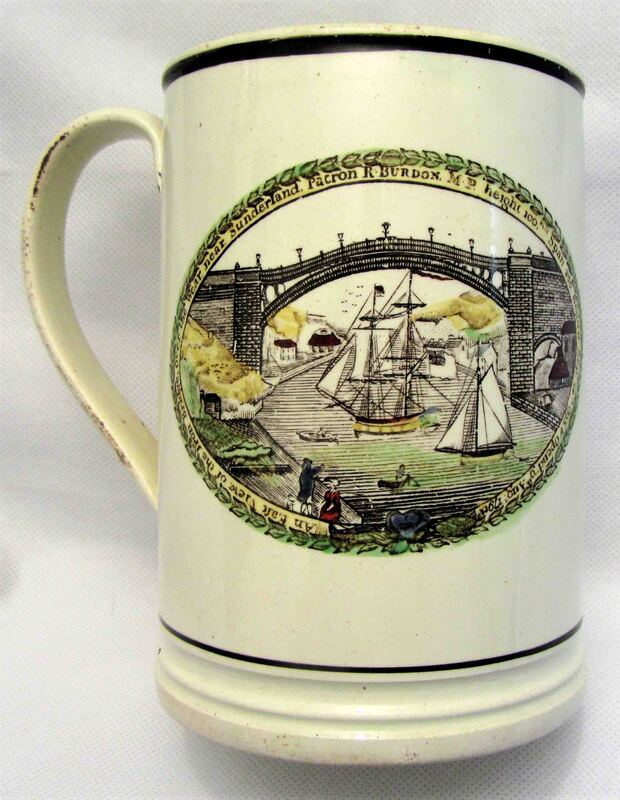 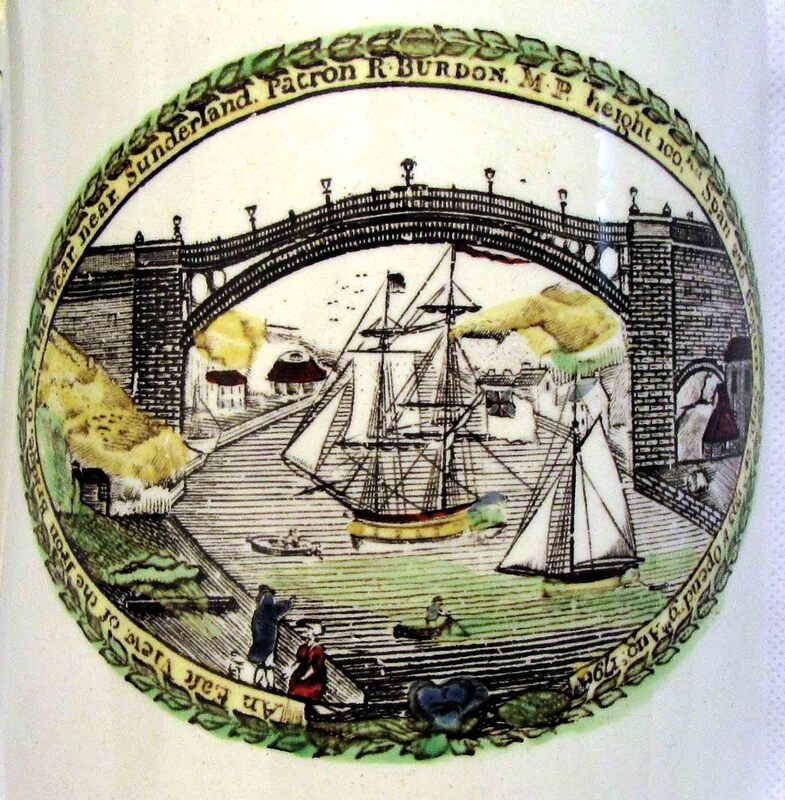 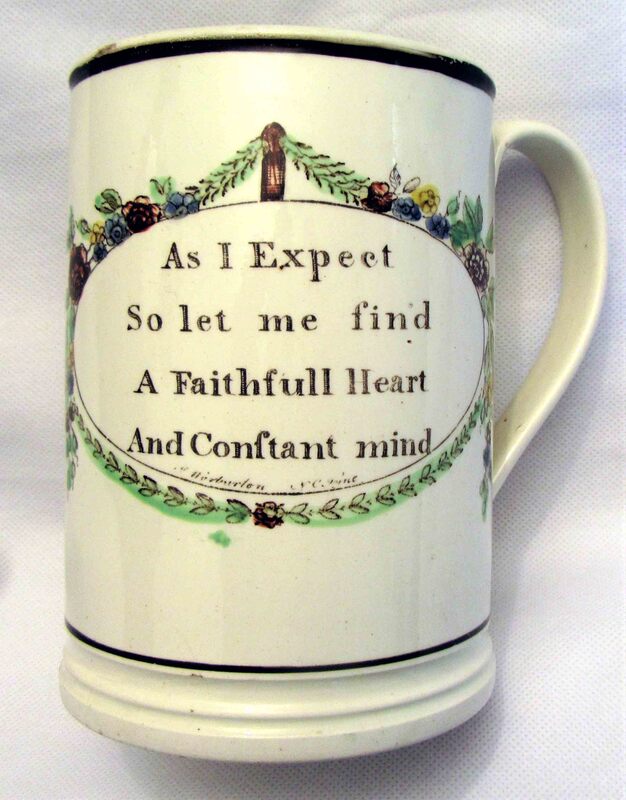 The mug below has the Warburton bridge transfer, but has decorative features firmly attributable to Scott's Pottery in the 1830s. 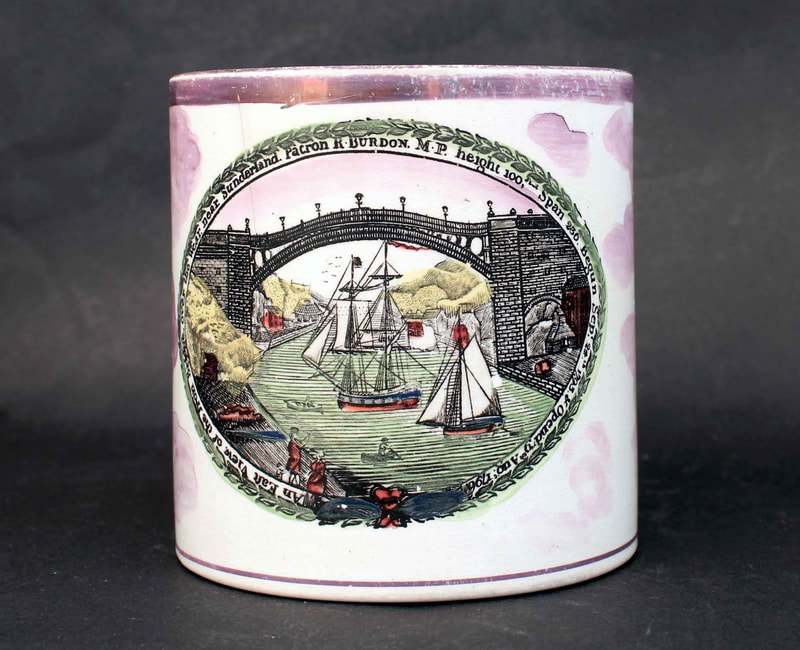 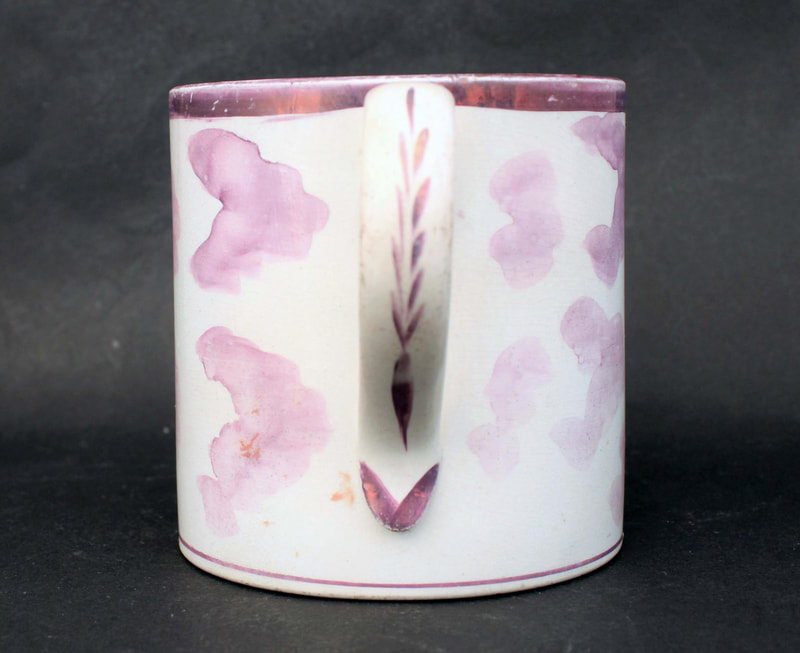 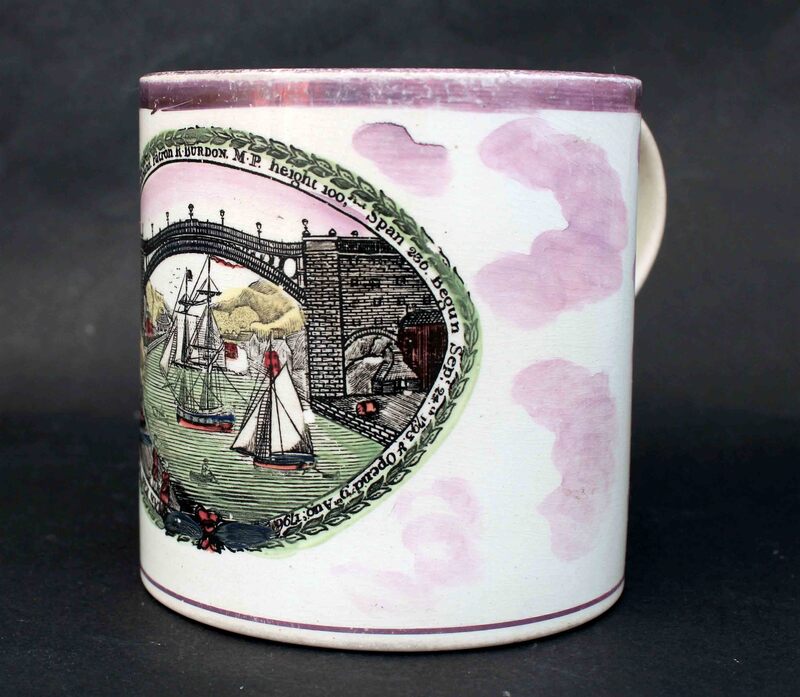 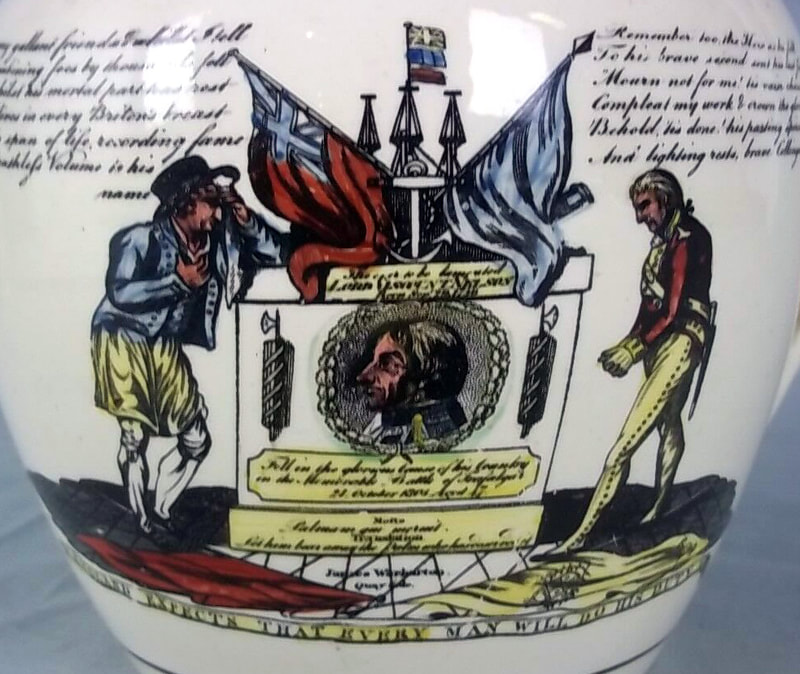 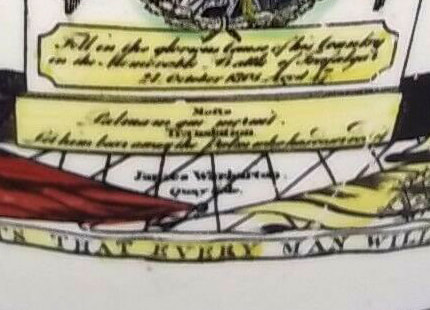 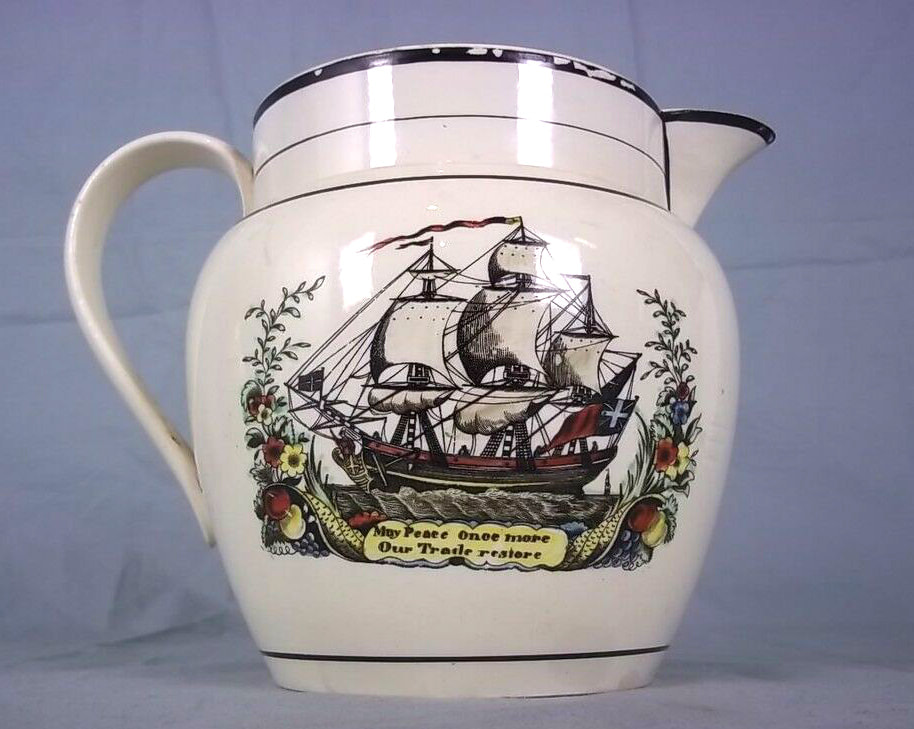 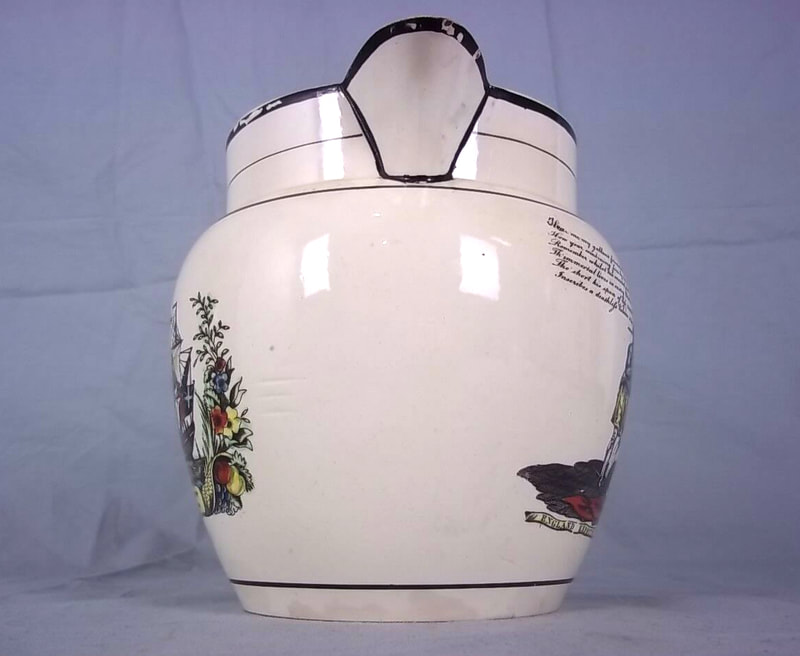 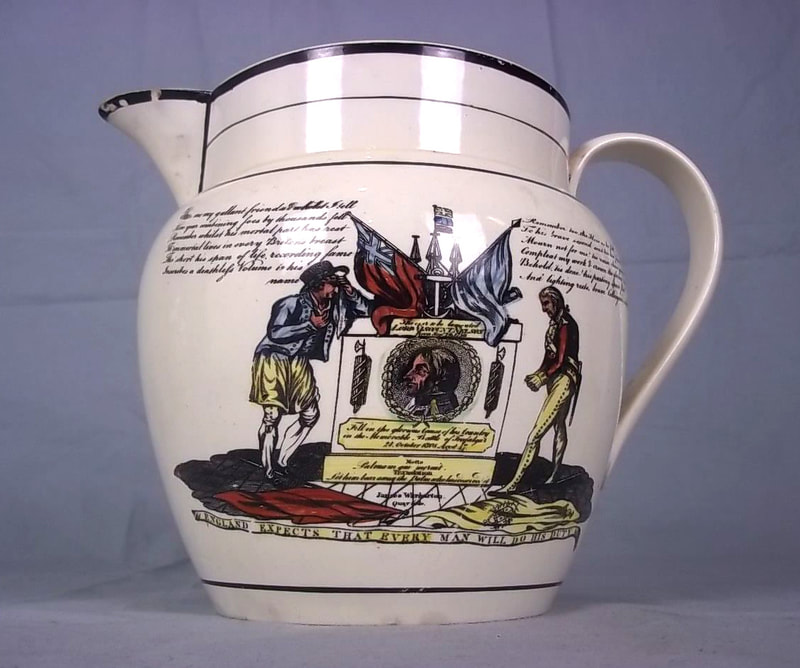 The mug below shares the same transfer as the creamware jug, but has decoration similar to Scott's mugs in the 1830s.  The enamelling, however, is strikingly similar to the jug above. 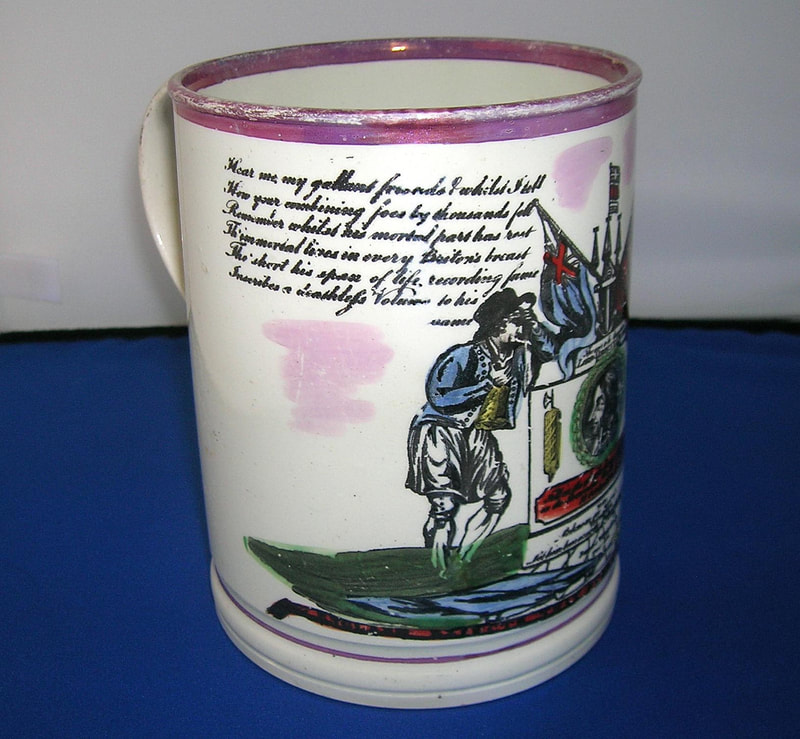 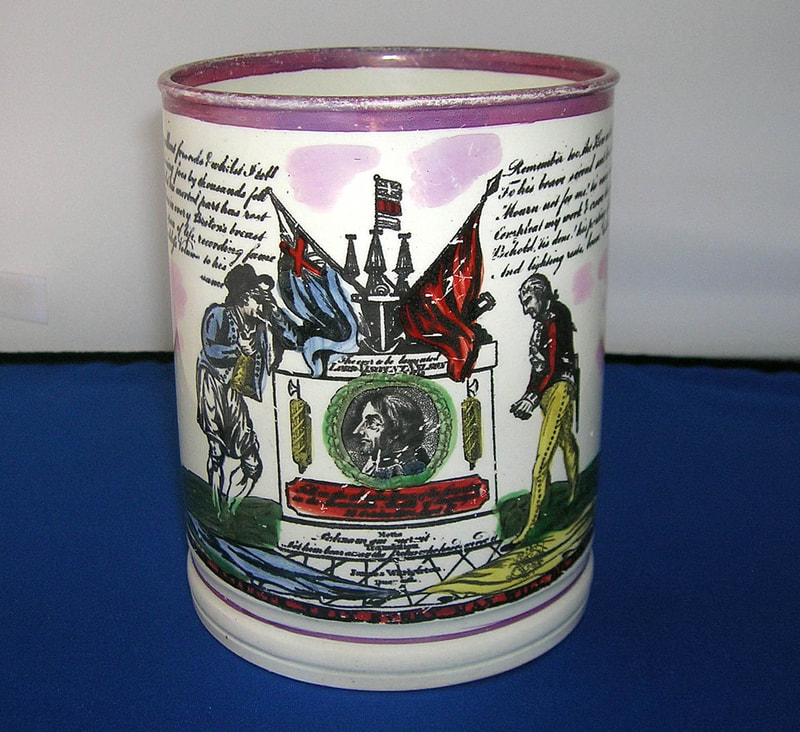 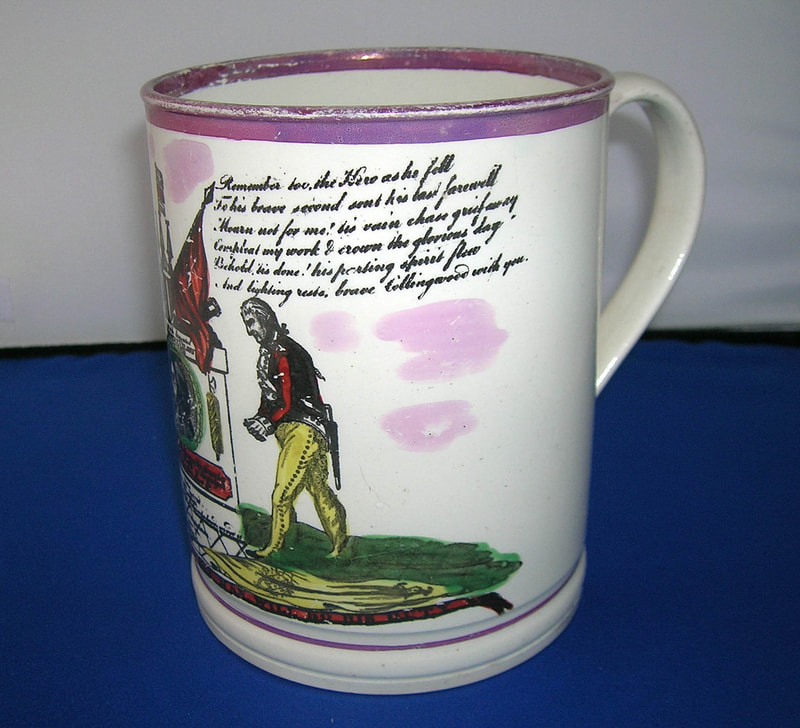 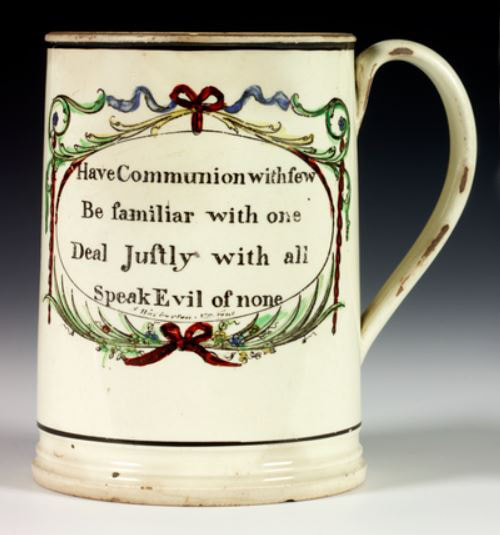 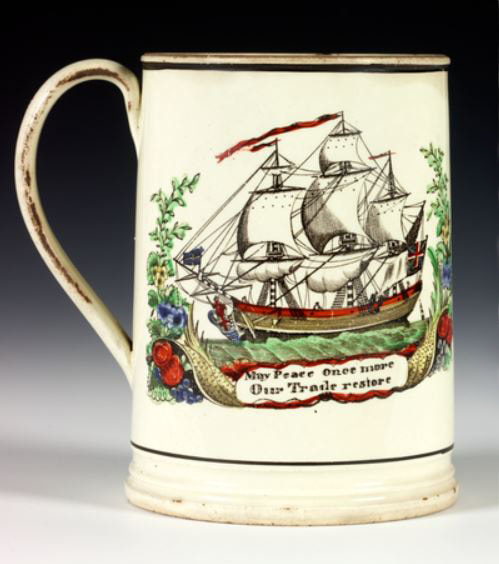 The mug above is ​from the Sunderland Museum & Winter Gardens, Tyne & Wear Archives & Museums collection. 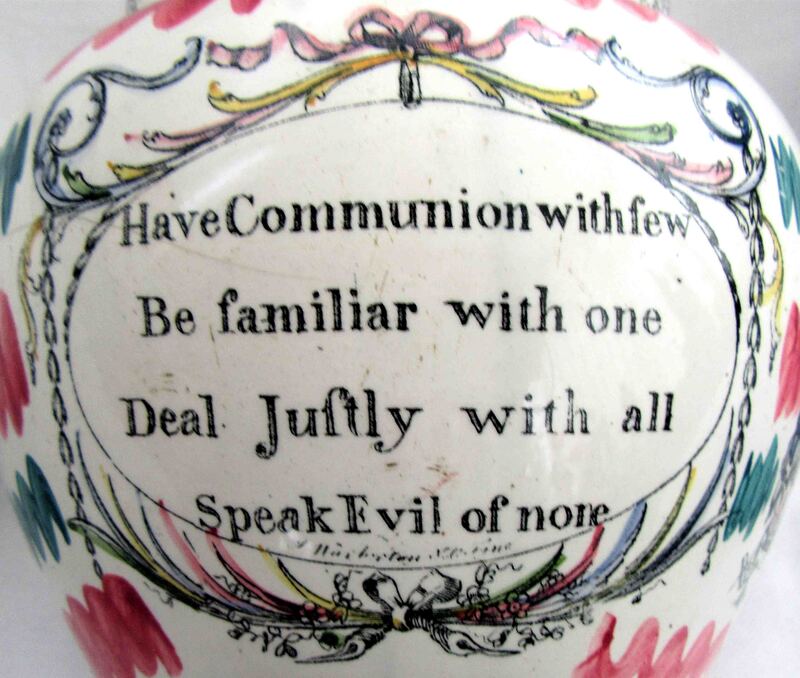 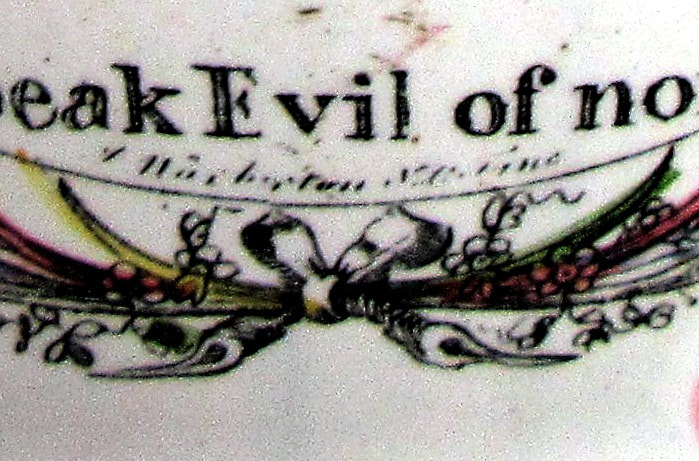 This jug has typical red, green and blue enamel decoration used by Moore's Pottery from the late 1830s into the 1840s 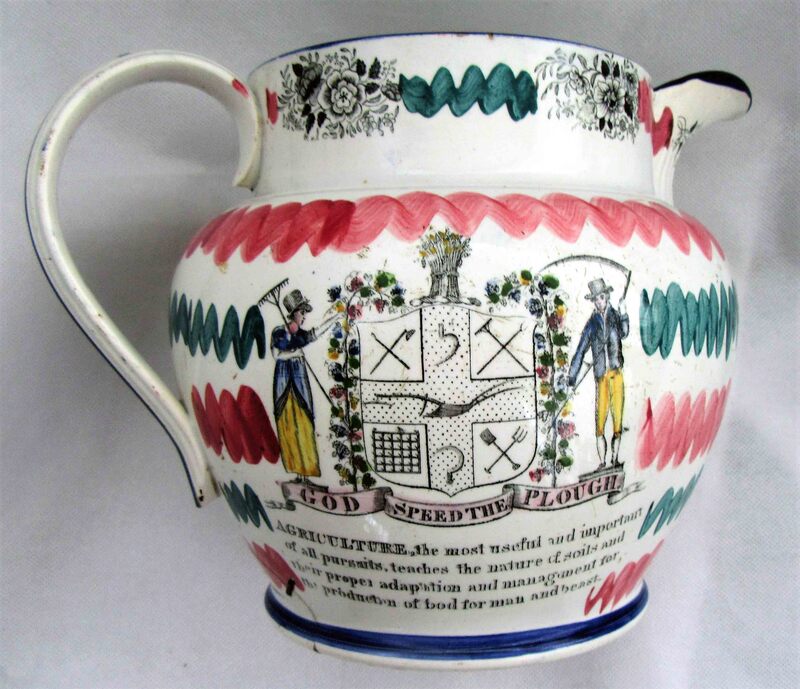 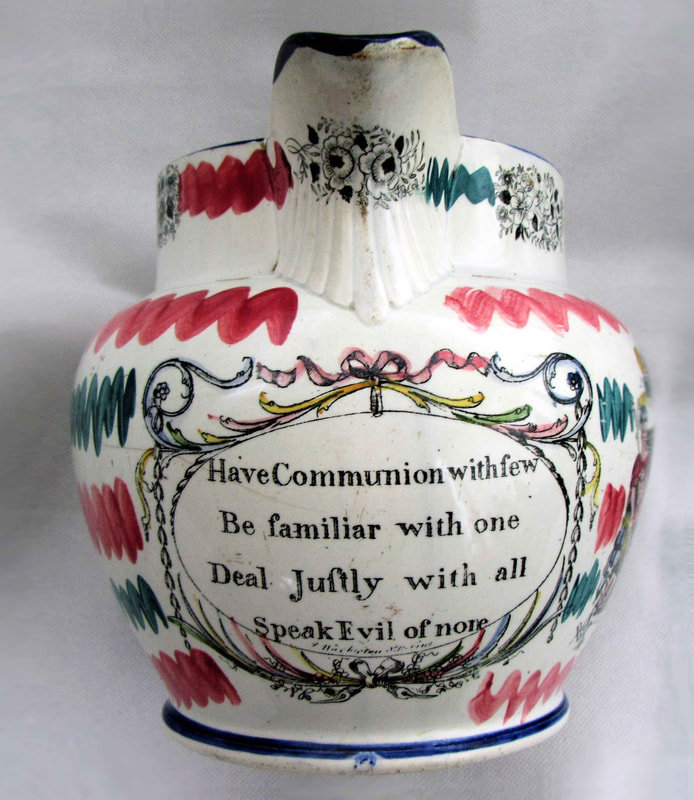 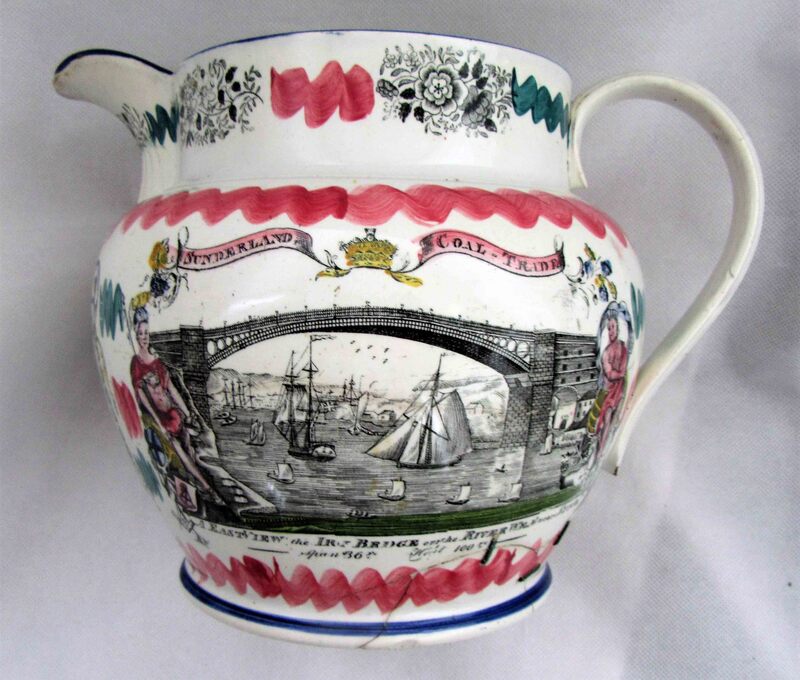 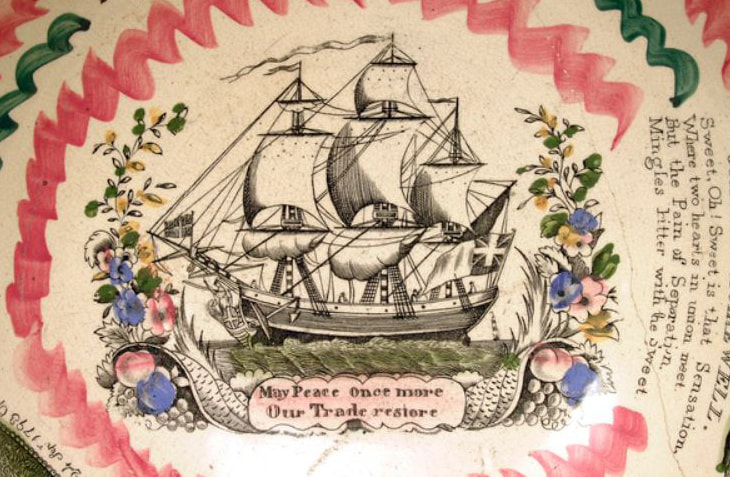 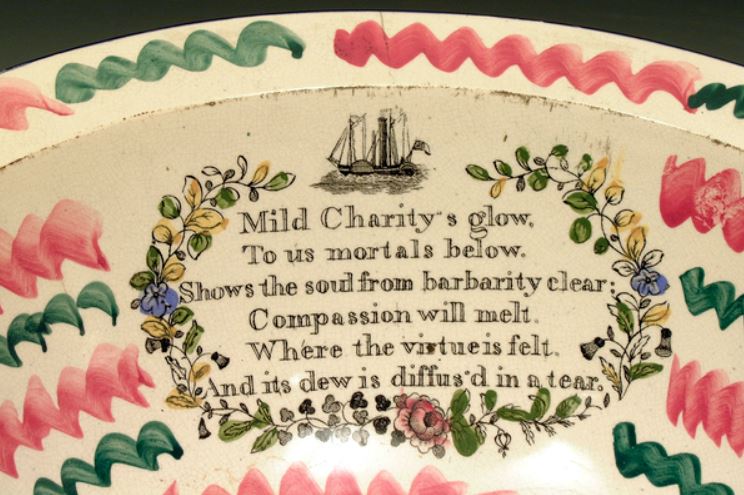 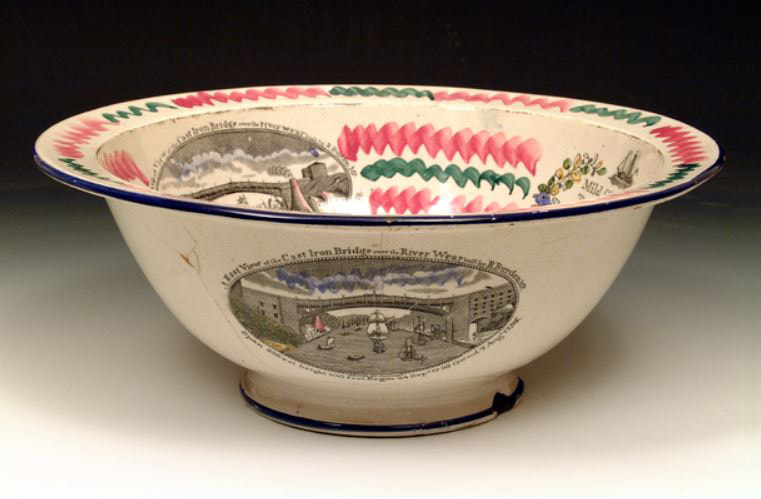 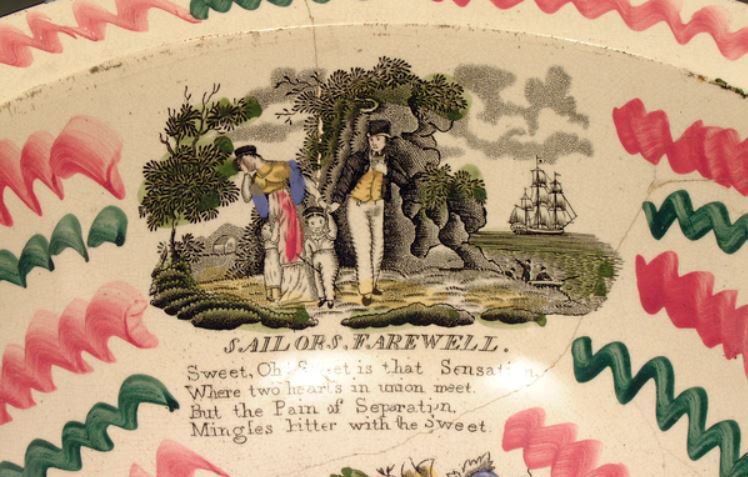